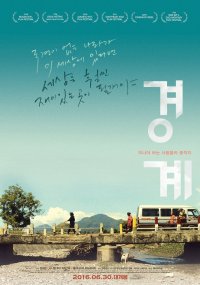 "Fluid Boundaries" is a collaboration between South Korea, Singapore and Indonesia.
Synopsis
Vladimir Todorovic, Moon Jeong-hyeon, and Daniel Rudi Haryanto - film directors from Serbia, South Korea, and Indonesia, respectively - met at an international film festival and decided to make a movie about those who stand at a border or who cross such a border. In a series of letters, the three directors share the personal stories of boundary-crossing people. The stories vary with their diverse experience: An Indonesian woman living in Japan; workers of all nationalities who gather to Singapore to find a job; the desperate reality facing an immigrant family in South Africa; the memory and testimony of a person who left Vietnam and grew up in a refugee camp in Indonesia; and those who frequently cross the border demarcating East Timor and Indonesia. One director contemplates Serbian history while traveling through Vietnam, and another thinks about the tragic life of his uncle, who had to change his nationality from Joseon to Korean. This road movie portrays the immigration history of those who had to cross borders for political or economic reasons, and the unpredictable twists of modern history.

View all 18 pictures for "Fluid Boundaries"