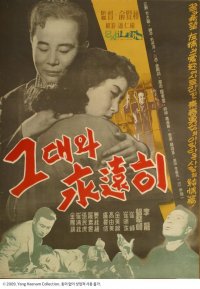 Synopsis
Gwang-pil (Lee Ryong), Dal-soo (Choi Bong) and Sang-moon (Choi Myung-soo) are gangster boys who pick pockets. Ae-ran (Do Kum-bong), who works at a bakery, and Gwang-pil have known each other from childhood and are lovers. The three gangster boys rob a US army warehouse, but only Gwang-pil is caught and placed in a juvenile reformatory. Hearing that Ae-ran works as a barmaid, Gwang-pil escapes from the reformatory to see her. While Gwang-pil meets her, he is caught by a cop who has been chasing him. He is sent back to prison. Ten years later he is discharged. Expecting to meet Ae-ran, Gwang-pil realizes that the letters and parcels were sent by Sang-moon, who had become a priest. Dal-soo, who had married Ae-ran, and became a boss in the underworld, runs a nightclub. Gwang-pil visits Ae-ran at a hospital and meets her 9-year-old daughter, Eun-ji. He suspects that she is his own daughter, but he is helpless because there is nothing he can do. Dal-soo and his followers are wanted, because the body of someone his men had killed rises to the surface. The manageress of his nightclub is arrested. While under the order of Dal-soo, she proposes to do business with her and takes Gwang-pil to Incheon. With the guarantee of the priest, Gwang-pil is released and goes to the hospital to be present at Ae-ran's deathbed. But Dal-soo tries to kill Gwang-pil because he misunderstands him. Bloodstained, Gwang-pil arrives at the hospital, but she has died.


Forever With You | Cast

Forever With You
Stream and watch full movie

Forever With You | HanCinema Reviews

Forever With You | News

Forever With You | Soundtracks, OST (Sponsored)

Forever With You | Pictures

View all 7 pictures for "Forever With You"

Forever With You | Links | Suggest a link

Forever With You | Reviews

Forever With You | Facts

Forever With You | Community

Forever With You (그대와 영원히)