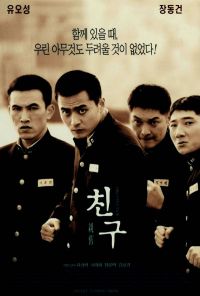 At a time when students had to fasten their collars and crease their slacks till they're razor sharp, these four friends strutted around in their own custom-fashioned uniforms. They walked the streets with their heads held high, shoulders straight, and chests out, fearing nothing when they were together. Joon-suk, a son of a vigilant gang boss; Dong-su, the only son of an undertaker; Sang-taek, a diligent student; Joong-ho, who never keeps his mouth shut. Those are the gang of friends who share their fantasies about naked woman on the porn magazine and their awe at Bruce Lee's Kungfu.
Each of their lives takes different turns as they grow up and their paths cross in conflict with each other's. Joon-suk becomes the leading henchman of his father's crime ring and Dong-su is serving for Joon-suk's rival gangs. Sang-taek and Joong-ho find themselves helplessly watching their two best friends wield knives at each other...

View all 40 pictures for "Friend"