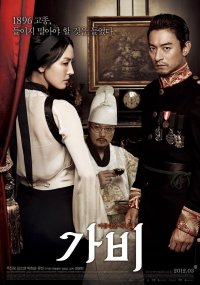 Also known as "Russian Coffee"
Synopsis
Toward the end of the 19th century, King Gojong (Park Hee-soon) of Koreas Joseon Dynasty briefly sought refuge at the Russian consulate under the threat of foreign invasion. Here he fell in love with a drink that had yet to gain popularity in his homeland: coffee. Returning to the throne, he hires the beautiful Tanya (Kim So-yeon) as his personal barista. Tanya becomes involved in a dangerous social circle that involves not only the Russian sniper Ilyich (Joo Jin-mo) but also the mysterious socialite known as both BAE Jeong-ja and Sadako (Yoo Seon). With her intimate connection to the King, making a drink that could easily conceal poison, Tanya must decide if shewill become a pawn in the political battlefield of late 19th century Korea.