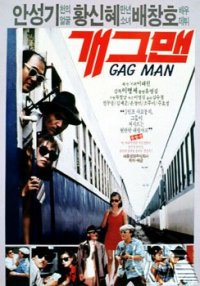 Synopsis
Lee Jong-se (Ahn Sung-ki) is a comedian working in a third-class cabaret with a dream of becoming a movie director. He goads Moon Do-seok (Bae Chang-ho) who runs a barber shop in the rural area to join him in a film, saying that he would put him in his movie. Moon Do-seok has always dreamed of becoming an actor and he immediately sells off his barber shop to follow Lee Jong-se around. Lee goes to a movie theater to catch a movie and coincidentally sits next to Oh Seon-yeong (Hwang Shin-hye). All of a sudden, she begins to kiss him during the movie. As it turns out, Oh Seon-yeong was running away from gangsters. After the movie, she decides to follow Lee to his house and hide out. Three people get together now and rub shoulders to make a movie themselves. One day, Lee is rehearsing for his stage at the cabaret and a soldier who escaped from the army (Son Chang-min) gives him a gun. Knowing this, Oh Seon-yeong instigates Lee and Moon to rob the bank, insisting that they need money to produce a movie. Eventually, the group robs the bank and becomes wanted by the police. They are on the run when a car mechanic (Kim Se-joon) recognizes their faces. Moon Do-seok accidentally kills the mechanic and Lee is on the run. He wakes up right before he is caught by the police. He realizes that all this was just his dream that he dreamt on a chair in the barber shop.

View all 13 pictures for "Gagman"