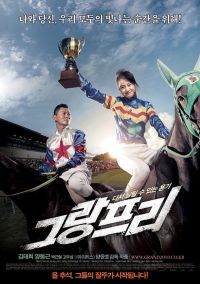 Synopsis
Grand Prix is a thrilling sports drama with comedic undertones that highlights the triumph of the indomitable sportsmanship of a female horse racer. The once-successful horse racer Ju-hee hasnt been in the field after the devastating arm injury and the loss of her own horse. To overcome depression, Ju-hee visits a mountain in Jeju island where she accidentally meets another racer Woo-suk who has the record of championing at the Japan Cup. Through Woo-suks encouragement, Ju-hee trains herself again and returns to the Grand Prix championship.

View all 95 pictures for "Grand Prix"