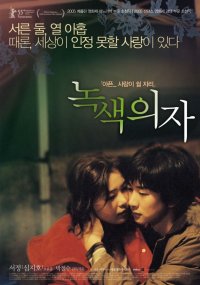 Synopsis
Moon-hee, a married woman in her thirties, has been arrested and convicted for having sex with an underage, Hyeon. After being sentenced to 100 hours of social work, Moon-hee is released only to find reporters hungry to sell her story to the press, and among them, Hyeon is standing alone. Leaving those hyenas, the two head for nowhere and stop at a small hotel. Day and night they indulge into each other through endless sex. After five days of sex and enjoyment, Moon-hee undergoes extreme changes of emotion, and suddenly says goodbye to Hyeon. However, Moon-hee soon finds herself still lingering on Hyeon.

View all 21 pictures for "Green Chair"