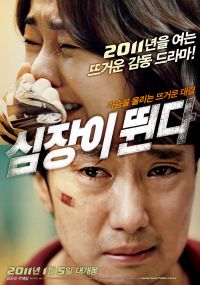 Previously known as "The Confrontation" (대결) and "Heart is Beating" on HanCinema
Synopsis
If you have one heart but two to save, what you will going to do?
One middle aged women is acrried into hospital in a coma. Yeon-hee, who has been searching for a heart to transplant to her daughter, who has critical heart disease, is begging middle aged womens gangster son, Whee-do, by giving him a fortune. But when the reasons for Whee-dos mom are revealed one by one, Yeon-hee, who became desperate, is teaming up with dangerous people...

Kim Yoon-jin of the ABC drama Lost returns to Korean film with a heart-throbbing drama that co-stars Park Hae-il (Moss, The Host).

Yeon-hee (Kim) has a daughter that needs a heart transplant to live.

At the same time, a woman comes to the hospital and is brain dead after a fall. Yeon-hee takes this as a chance from heaven and offers her son, Hui-do (Park), a large sum of money for his mothers heart.

Hui-do declines the offer and decides to fight for his mothers life, but he soon discovers that his mothers sudden fall was not an accident after all.

As he digs deeper into the case, Yeon-hee plots to arrange a heart transplant for her daughter no matter what.

This is director Yoon Jae-geuns first feature film. He is known as a writer of films like 2007s My New Partner and 2008s Hello Schoolgirl.

View all 100 pictures for "Heartbeat"