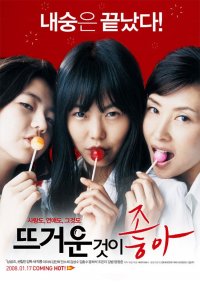 Ah-mi has been a freelance screenwriter for 2 years, but things dont seem to work out for her. She lives with her bigger sister, Young-mi, because she cant afford to live on her own. Ah-mi dreams of success and independence, but these seem far-off. She has a boyfriend named Won-suk, a member of an unsuccessful rock band, who is mostly broke. Then one day, she goes out on a blind date and a new guy, Seung-won, enters her life. A guy different from her boyfriend, Won-suk. While this is going on, Young-mi, the collected and sexy interior designer, meets an actor named Kyoung-soo. She gets a good feeling for the guy, but even her confident self gets jumbled up about love when she learns she has menopause. There is also Young-mis daughter, Kang-ae. She is a hard-headed high school student, whose current task in life is to figure out a way to get a kiss from her boyfriend, Ho-jae. Kang-aes best friend, Mi-ran, a self-proclaimed dating expert, coaches Kang-ae about love. Mi-ran helps Kang-ae plan a strategy for her first kiss, but their scheme goes haywire, and Kang-aes first kiss ends up being with Mi-ran. Although different in age, attitude about life, and dating preferences, the three women each learn to find their own unique way to happiness.

View all 42 pictures for "Hellcats"