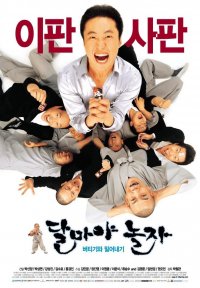 Also known as "Let's Play, Dharma"
Synopsis
After losing a bloody battle with a rival gang, Jae-gyu and his men become fugitives on the run and hide in a secluded mountain temple. They plan to lay low until their rival gang and the cops stop searching for them. At the temple, they find a group of disciplined monks who live a peaceful and orderly life. Jae-gyu and his gang see this as a great opportunity and ask the monks to let them stay. Refusing at first, later the monks permit them to stay, but only for one week. The week passes, but Jae-gyu and his men dont budge. So a new war between the gangsters and the monks begins. The rules are simple. If you win 3 games out of 5, the group who wins has the final say. From a 3,000-bow Buddhist ritual to a diving match and a game of Korean poker, its a gruesome war of wit and perseverance. Finally, Jae-gyus gang manages to win the long and difficult struggle. The temples Head Monk accepts them and allows them to stay longer. But the new rule is tough. If you want to stay, then you must obey the rule the rule of Buddha! Now the doctrine No work, no food is strictly applied to the gangsters, too

View all 39 pictures for "Hi, Dharma"