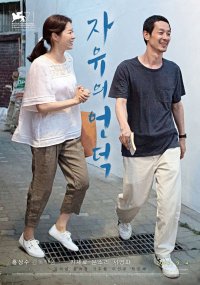 Synopsis
Gweon (Seo Young-hwa) is a physically ill language teacher who wanted to give it all up. She comes to a mountain to try and recover her body and return to Seoul, back to the school where she used to teach. There she is entrusted with a thick parcel. Two years earlier, Japanese Mo-ree (Ryo Kase) had asked her to marry him. Gweon decided to leave, and the next day rejected him. Although Mo-ree immediately returned to Japan, he is once again seeking her out. She reads part of his letter at the school lobby, and afterwards feels a need for some fresh air. Coming down the stairs her head gets dizzy and falls down, losing the letters out of her hands in the process. Collecting the dispersed letters she realizes that they have no date. Now she must figure out the correct order.

View all 35 pictures for "Hill of Freedom"