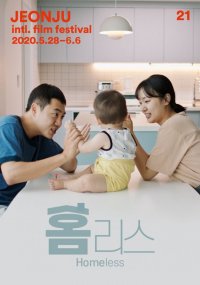 Synopsis
Han-gyeol and Go-woon is a young couple raising their newborn Woorim. Not too long ago, they got scammed by a real estate agent and lost their entire fortune leaving them homeless. Eventually, they lug their belongings and try to sleep at Jjimjilbangs every night. Han-gyeol provides delivery service driving a scooter and Go-woon put up flyers carrying Woorim. However, it seems impossible to find a place to live by their endeavors alone. One day, Woorim gets hurt at a Jjimjilbang and the couple's situation becomes more desperate. They end up temporarily staying at a house of this elderly woman whom Han-gyeol got to know through his delivery service work. Han-gyeol tells Go-woon that this lady is visiting the US for a month but the whole thing feels suspicious to her. Homeless illustrates the despair of the younger generation toward housing problems. The couple dreams to live a life like a model house that appears in the first scene, but the reality is the opposite. They have inner conflict between the desire to turn the lady's house into their stable home and the guilt. This is clearly expressed through rookie actors Park Jeong-yeon and Jeon Bong-seok. [MOON Seok]