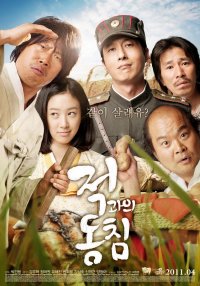 Previously known as "Sleeping with the Enemy" on HanCinema
Synopsis
Marking the 61st anniversary of the outbreak of the Korean War, the film In Love and the War hopes to shed light on the wars impact on innocent civilians.
Directed by Park Geon-yong, who made his directorial debut with Bronze Medalist in 2009, In Love and War was inspired by an anecdote about the screenwriters grandmother.
uring the Korean War, a group of North Korean soldiers stayed for a couple of days at the grandmothers house and one young soldier, touched by the villagers hospitality, said he wanted to stay.
The movie follows this story line and adds another subplot about a star-crossed couple.
Kim Joo-hyeok is an officer of the North Korean Peoples Army who arrives in a small town, where he meets Jeong Ryeo-won, a smart young woman who is loved and trusted by the townspeople. The couple strives to stay together, despite being on different sides of the war.
The townspeople, meanwhile, struggle to deal with the arrival of the North Koreans and eventually side with the soldiers in order to survive.

In Love and the War | Cast

In Love and the War | HanCinema Reviews

In Love and the War | News

In Love and the War | Shopping

In Love and the War | Pictures

View all 79 pictures for "In Love and the War"

In Love and the War | Videos | Suggest a video

In Love and the War | Links | Suggest a link

In Love and the War | Reviews

In Love and the War | Facts

In Love and the War | Community