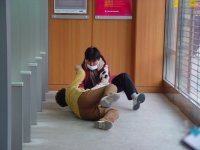 Synopsis
From the Academy Award winning director of "Parasite", Bong Joon-ho s "Influenza" is a startling short film that marks a singular achievement in the filmmaker s thrilling body of work. Such an impression is clear from the very first image a security-camera perspective through which he ll orchestrate his characteristic tensions, twists, and brutal acts of violence and grows stronger the deeper we wade into his nightmare vision. Bong s typical instances of levity are few and far between, and an extreme austerity only heightens the mystery, the shock of what unfolds. By film s end you ll be asking yourself, more than with any of his works, What did I even see? Completed between "Memories of Murder" and "The Host" but never before released, "Influenza" demonstrates a young filmmaker reaching the height of his powers.