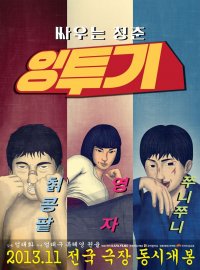 Also known as "INGtoogi: The Battle of Internet"
Synopsis
No movie ever seen before is here.
This generation's youth, fighting mightily known as the 'carps', have started moving.

Tae-sik, a carp-human who is active online as 'black-bean' is attacked by another character called the 'Johnson' in the same community.
A video of himself being beaten up is spread online in no time...
Tae-sik plans to take revenge on Johnson.
He starts learning how to fight with his friend Hee-joon and meets a girl named Yeong-ja.

Tae-sik lives life without a clear target and Yeong-ja relieves her stress by eating while Hee-joon wants to fill up his hollow self. These three get together like a volcano.

View all 52 pictures for "Ingtoogi"