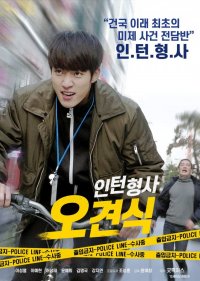 Synopsis
This is the birth of an intern detective in Korea's first unsolved cases task force!

Oh Tae-sik, rather, Oh Kyeon-sik, who has been preparing to become a detective while working a different job, is a private establishment security guard who earns 880,000 won in Daechi-dong, Gangnam.

The reason he became Oh Kyeon-sik is because, when his grandfather put him down on the family register, he accidentally misspelled the Chinese character of his name with a dot. Therefore, Tae-sik became Kyeon-sik, which also means 'dog food'.

Kyeon-sik wants to be a detective, because his family has wanted a detective for generations. His grandfather was illiterate and his father had problems with sight. Kyeon-sik ends his depressing day with the comfort of his colleague over some drinks.

Then one day, coincidence happens and a fugitive on the run gets caught by Kyeon-sik when he throws a bottle of water he just bought at the runner. Kyeon-sik becomes a hero thanks to this.
He has only one wish and that is to be a detective. The major who doesn't know about him promises him a spot on the team.
However, the detective team, who are just about to get their investigative independence, are worried that Kyeon-sik will cause trouble and they finally come up with an idea!!

"Hey! Make him a yellow identification!! He's the intern from today!!"
"This is awesome! The intern detective will be the stepping stone to my career."

View all 6 pictures for "Intern Detective"