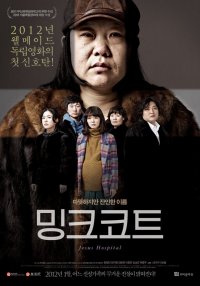 Synopsis
2011 ACF Post-production Fund
In this story of a middle-aged woman who is caught between her religious beliefs and reality, Hwang Jeong-min-I, who garnered rave reviews for her performance in [Save the Green Planet], succeeds in leaving a powerful impression as the leading character.
From the viewpoint of Christianity, the womans religious beliefs are unorthodox. So, she is unable to confidently express her convictions and just keeps them concealed like something unethical. Just like her beliefs, her reality is not so easy. Even though she seems to be the one who loves her mother the most, she is uncertain as to how long she should keep her comatose mother alive. When her beloved daughter and her son-in-law deceive her and side with aunts and uncle who want to cut her life short, she has no choice but to break down.
The film is not easy on the eye. Just like a mink coat in the middle of the winter, it bears a lot of weight. Nevertheless, there exist universal aspects that cannot be overlooked. The universality of conflict, confrontation and reconciliation between the characters makes the heart ache. (JEON Chanil)

View all 18 pictures for "Jesus Hospital"