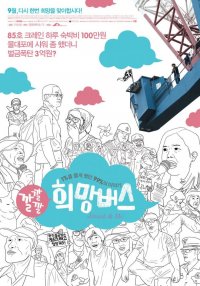 Synopsis
I was living a comfortable life. Until I got on that bus...However, June 2011 my life changed. At first I was just a passenger. I was sorry, I wanted to see and wanted to be some kind of support. I started taking in those people of surprising scenes in my camera. People who make hope, those who make the bus and those who get on it and Kim Jinsuk and laborers who continued the high sit-in's without knowing how long it will last. The woman from the high and dangerous place started communicating with the people through Twitter and became friends. I was in love with her. The love spread to not only her but everyone else. The fight that seemed impossible became otherwise as I believed in love and hope.

View all 33 pictures for "Jinsuk and Me"

Jinsuk and Me | Videos | Suggest a video

Jinsuk and Me | Links | Suggest a link