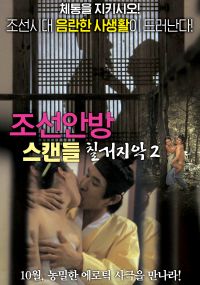 "Joseon Scandal - The Seven Valid Causes for Divorce" the second story!
Kyeong-hwan and Yang-soon are poor but happily married. They don't have much, but Kyeong-hwan who had some real estate going on, makes it big. Just when they think life is going to get easier, Yang-soon falls ill and Kyeong-hwan brings home a concubine named Eun-chae who gets pregnant. Kyeong-hwan only has eyes for Eun-chae which cases Yang-soon to get angry and hurt Eun-chae...

Sixth Story: Gossip
Beom-soo, the son of a poor gentleman, gets sold to an old man but runs away. He meets Eun-sim who is crying in the streets and marries her. However, Beom-soo's mother doesn' t like her for she is poor. A rich widow named Yeon-sil falls for Beom-soo and buys her way into the house. Beom-soo's mother and the widow pressurize Eun-sim...

"Lies"
Don't you want it?
Is it only me?
Am I the only one who wants to be happy?

Ah-yeong has Ripley's.
She dresses up to go look around expensive apartments,
She shops in shopping malls and act like she's going to buy them
and she even shows off to her colleagues that she's got a rich boyfriend to marry soon.

Then one day, a poor but innocent man named Tae-ho approaches her. Ah-yeong accpets his proposal and her bluffs start to turn out. Only Tae-ho believes he can put Ah-yeong in the right path.