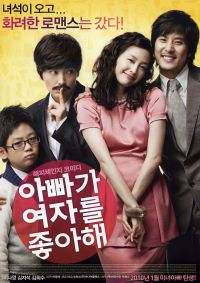 Also known as "Dad Likes Women"
Ji-hyeon (Lee Na-young) is enjoying a perfect life as a beautiful photographer following a sex-change operation, until a young boy claiming that she had fathered him comes knocking at her door. Trouble ensues as Ji-hyeon tries to act like a conventional dad while her boyfriend (Kim Ji-seok-I) grows increasingly suspicious.

View all 50 pictures for "Lady Daddy"