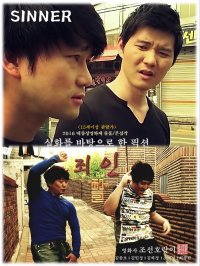 Synopsis
Yoo Ga-joon lives like a loser in this world. His brother Yoo Beom-joon lives with resentment. Ga-joon, Beom-joon, Jeong-yi and Yeong-gil earn a living by taking requests. They aren't a huge organization but no one else can pass over them. Ga-joon is a known self-willed man who does anything and everything in his power to expand their organization in their territory until Arnold, the boss of the Arnold Gang attempts to do something to stop them. Ga-joon and his friends are in danger and their fates are standing on the edge of a knife. Ga-joon is still arrogant and he meets someone at the peak of his notorious days. He meets Soo-bin who is holding a Bible and learns about love. He opens up to the world as a ray of light shines on him thanks to her. His friends however, becomes sacrifice to Arnold and Ga-joon sets out to find them with a Bible in his hand...

View all 37 pictures for "Law Breakers"