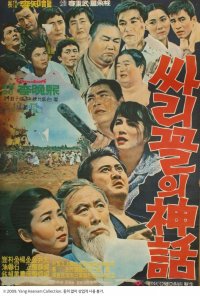 Re-release date: 2019/06/14
Synopsis
During the Korean War (1950~1953) Second Lieutenant Kim asks an old citizen Gang of Ssarigol village to hide seven stranglers of his unit, and then he leaves to follow his ranks. An armed force official from the North side, who used to be a farm servant of the town, enters the town with armed forces and threatens the town members to hand the hidden soldiers of the South side over to them. The seven South Korean soldiers cannot but to start a combat with the North Korean soldiers. By the time, Second Lieutenant Kim's unit arrives at the town to help them to defeat the enemy. Ssarigol restores peace as usual.

View all 20 pictures for "Legend of Ssarigol"