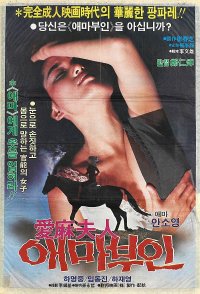 Alsok known as "The Ae-ma Woman", "Mrs. Emma"
Synopsis
Lee Ae-ma's husband, Sin Hyeon-woo, is in jail for involuntary homicide. For the past two years, Ae-ma has visited her husband every week. Though she is anguished by Hyeon-woo's affairs, Ae-ma is unable to divorce him even though everyone thinks she should. While visiting her husband, Ae-ma meets Kim Dong-yeob, a student of art, and feels his sincerity. One day, Ae-ma runs into an old boyfriend, Kim Moon-oh, who lives in the same apartment complex. They engage in an affair. However, Ae-ma is unable to bear the perverted sexual preferences of Moon-oh. She goes to Dong-yeob and engages in a pure love. Hyeon-woo asks for a divorce. When Ae-ma is in the country, Dong-yeob comes to her and promises to take her to France. However, the day they are supposed to leave for France, Hyeon-woo is released from jail on a special pardon. Though she was on her way to Dong-yeob, Ae-ma finds herself greeting Hyeon-woo, unable to free herself from the shackles of marriage.

View all 32 pictures for "Madame Aema"