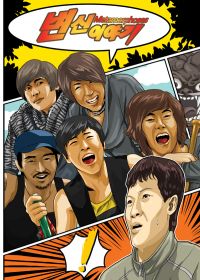 Synopsis
Rookie cartoonist Oh Seong-gil can't get an idea for a new piece, so he takes a walk in the park to cool his head. However, despite the fact that he has a girlfriend, the real reason why he walks the park is because there is a woman who jogs there at the same time on the same course. One day, Seong-gil gets the chance to talk to the girl he's been watching for over two months, and he follows her to the woods. He loses her and gets lost. That is when a strange man approaches him, and things take an unexpected turn.

View all 11 pictures for "Metamorphoses"