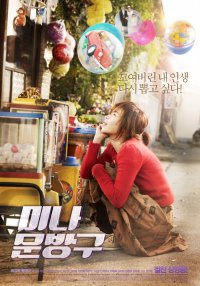 Formerly known as "Mina's Stationary Shop" on HanCinema
Synopsis
Mi-na takes over a small stationery store from her father when he suddenly falls down. She wants to sell the store because it seems only troublesome to her. But it is not as easy as she thought. The store's regular costomers force her not to sell it. The objections of the little children is hard to resist.

View all 62 pictures for "Happiness for Sale"