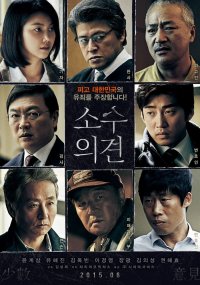 Also known as "The Unfair"
Synopsis
Based on the original by Son Aram, this movie is about the 'Yongsan Crisis'. The leading character becomes a civil lawyer without special will but ends up defending Park Jae-ho who killed a policeman at the scene of crisis.

View all 84 pictures for "Minority Opinion"