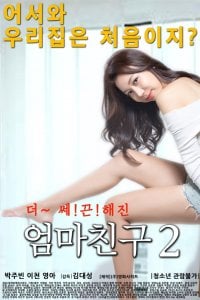 Synopsis
"Come on in~ this is your first time here, isn't it?"
An art student named Gwang-ho gets dumped by his girlfriend because she was only his source of comfort, and that he's a Mama's boy and a premature ejaculator. He tries to avoid seeing her by going to a different academy and that's when his mother introduces him to her friend Soo-yeon, a sophisticated and intelligent looking woman. Gwang-ho falls for her.
Gwang-ho's mother suddenly leaves for Australia because his father is sick and Gwang-ho gets to stay in Soo-yeon's house for a few days. Looking at her, he thinks of all the things he would like to do with her and Soo-yeon's niece Ha-kyeong stimulates him to do something about his feelings.
One day, Gwang-ho finds out that the man in the background of Soo-yeon's phone is his father and finds a picture of his father in Soo-yeon's work room while having sex with Ha-kyeong. He asks Soo-yeon about her relationship with his father. Soo-yeon tries to hide it saying that she has a crush on him but in the end she tells him the truth. Gwang-ho packs his bags and swears to tell his mother about it but Soo-yeon begs him not to and that she'll do anything for him. So, he asks her to help him become a man by becoming good at sex...