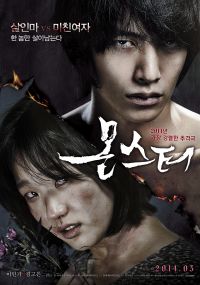 Synopsis
Bok-Soon (Kim Go-eun) runs a street stall while taking care of her younger sister. Bok-Soon may not be the brightest girl but what she lacks in intelligence, she makes up for in uncontrollable rage. She's infamously known as the "psycho bitch" in her neighborhood. Bok-Soon's relatively peaceful life with her sister is disrupted when they cross paths with a serial killer named Tae-Soo (Lee Min-ki). Tae-Soo kills Bok-Soon's sister because she may have stumbled upon the truth of his murderous lifestyle. Bok-Soon's rage consumes her completely, leading her to plot her revenge on Tae Soo. Meanwhile, Tae-Soo vows
to tie up his only loose end-Bok-Soon. Bok-Soon's descent into revenge and electrifying struggle with Tae-Soo culminates in a riveting conclusion. Who will emerge alive-hot-blooded Bok-Soon or cold-hearted Tae-Soo?

Production Note
The Showdown between the Psychopath and the Psycho-bitch
Ruthless psychopath Tae-Soo and raging psycho-bitch Bok-Soon battle it out head-to-head in Monster. The film is South Korea's first ever action-thriller portraying a strong leading female character battling it out with a psychopath killer.
Existing Korean action-thrillers usually revolve around the situation and incident. However, Monster's story is solely driven by the impulse of its characters.
"A lot of thrillers focus on the chase, action, and mystery. But, Monster's focal point is on its well defined characters,", "'Monster - Movie' is an in-depth character study and portrayal of human emotions focusing on loneliness and neglect," said director Hwang In-ho. The character of Tae-Soo (Lee Min-ki) goes well beyond the typical portrayal of psychopaths in Korean movies to a level of monstrosity. In addition, Bok-Soon's character dramatically pivots from pure innocent girl to a ferocious psycho-bitch as the story progresses in Monster.
These characters are a dramatic transformation for 'flower boy' Lee Min-ki ("Shut Up: Flower Boy Band") and angelic Kim Go-eun-I ("A Muse"). Lee and Kim are best known for their bright and cheerful roles in their previous films and television series. Now they return to the big screen as two completely insane characters who are more than ready to tear each other apart.

Cast and Characters
Cold Blooded Serial Killer - Tae-Soo (Lee Min-ki)
Tae-Soo is a heartless murderer, who methodically covers up his tracks. But, he cares deeply for his adoptive family, who took him in as a young boy. One day, Tae-Soo's older brother asks him for a favor-to kill a man. Out of love and loyalty, he gladly accepts the request.
After killing his target, Tae-Soo discovers a witness to his crime. In pursuit, he finds the witness with none other than Bok-Soon's sister. Tae-Soo is desperately driven to tie up loose ends, so he murders her and adds Bok-Soon herself to his hit list.

The Girl With The Uncontrollable Rage - Bok-Soon (Kim Go-eun-I)
Bok-Soon is known as the neighborhood "psycho-bitch." But that kind of name-calling doesn't affect her at all. She only cares about working hard and saving up money for her younger sister's education. All of that changes when her sister is killed. Bok-Soon's uncontrollable rage is awakened and her mind is solely set on going after Tae-Soo.