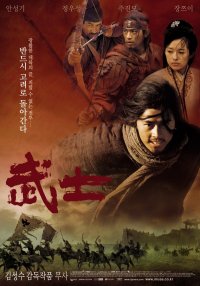 Also known as "The Warriors" and "Musa - The Warrior"
Synopsis
It is 1375 and China is in constant turmoil. Koryo, one of Koreas ancient kingdoms, sends a delegation of diplomats and soldiers as envoys to the new Chinese dynasty in power, Ming. However, the delegation is accused of spying and sent in exile to the desert. Duty and patriotism are reduced to mere burdens as they trudge on east over the vast Chinese continent with the single hope of returning to their beloved home and families. The vertical chain of command breaks down into a horizontal line of relationships and the warriors gradually come to understand each other as individuals. They are neither marital arts masters nor even knights, but they give their lives for the Han refugees they meet on the way, seeing the faces of their loved ones reflected in the refugees, and act out the true spirit of warriors.

View all 66 pictures for "Musa"