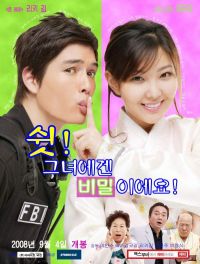 Mimi falls in love with Albert while working for the Korean embassy in the United States. But Albert disappears on the day he is supposed to propose to her. In fact, he is an FBI agent and has to conceal that fact. Mimi returns to her hometown when her visa expires. Albert follows her to Korea but Mimi and her neighbors are not happy with his belated apology.

View all 32 pictures for "My Darling FBI"