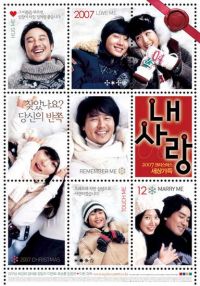 Several people experience a miracle of love under the spell of a solar eclipse. Se-jin is obsessively in love with a very bizarre young woman named Ju-won. So-hyun confesses her feeling for Ji-wu by clinging to him and asking him how to become a strong drinker. Jeong-seok is a single father working as a copywriter, loved by Su-jeong, whose advances he rejects every time. Jin-man is a free-hug activist who returns to korea to meet his old flame.

View all 67 pictures for "My Love"

My Love | Videos | Suggest a video

My Love | Links | Suggest a link