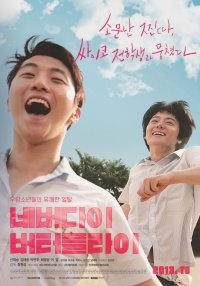 Synopsis
Known loser Ha-neul gets together with psycho Myeong-ho! School leader Chi-woo's sandbag and shuttle Ha-neul. Everything changes when Myeong-ho transfers to his school in the start of the senior year.
Ha-neul's life changes with everyday with his new friend.
Meanwhile, Ha-neul meets a sexy girlfriend named Se-jin at Myeong-ho's luxury birthday party and has the honor of becoming her boyfriend.

With Ha-neul's gift of drawing, Jae-yeol's quick thinking brain that earns him first place in the school and Myeong-ho open an adult site of their own. It's the perfect match. WOW.
Meanwhile, Man-sik, a stalker who has a crush on Myeong-ho's girlfriend Ah-reum keeps approaching Myeong-ho who loses the USB containing important information regarding their adult site...

Ha-neul's reputation is ruined as the school finds out about the site and Chi-woo dreams of revenge...
Their final flight takes place now...

View all 51 pictures for "Neverdie Butterfly"