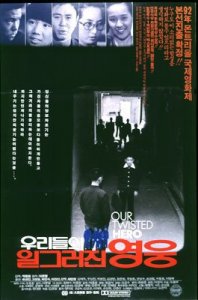 Synopsis
This is the story of the dreams, agony discord and friendship of a group of country school boys before the beginning of Korea's economic boom in the late 50s and 60s. The story begins with Han Byeong-tae, a lecturer at a college entrance preparatory institute, recalling his primary school days, 30 years ago. Byeong-tae's father was transferred at that time into a rural area from his government office in Seoul. Byeong-tae started attending the local school, there he meets Eom Seok-dae, The class monitor and bully. At first there is conflict between the two boys but eventually Byeong-tae submits to the oppression. A new teacher, Kim chong-won takes Charge of the class and begins to put all the wrongs right by teaching the boys about equality, justice, truth, courage and democracy.

View all 14 pictures for "Our Twisted Hero"