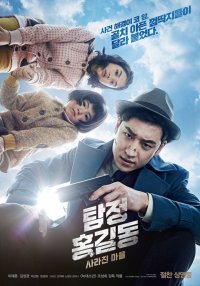 Crank in 2014/12/02
Crank up : 2015/04/16
Also known as "Detective Hong Gil-dong"
Synopsis
Private detective Hong Gil-dong has one goal in life: find the killer who murdered his mother and exact revenge on him. Its been 20 years since he witnessed the murder and he finally has a name  Kim Byeong-deok. But when he tracks down Kim to a hut in the country, several men already came by earlier and took him away, leaving behind 2 young granddaughters. The girls become Hongs unlikeliest sidekicks as they once again close in on Kim and the shadowy organization that took him. In order to get his revenge, Hong must uncover the truth behind this organization that has very deep connections to every facet of the country. Little did he know that this is the same group that created both him and his nemesis...

View all 143 pictures for "Phantom Detective"