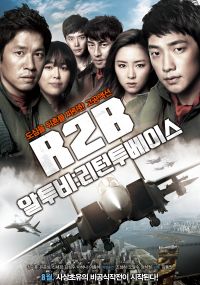 Synopsis
A South Korean Elite Black Eagles Air Force pilot Tae-hun finds himself transferred to a combat flying unit after a cocky, unplanned, and dangerous air show demonstration. On the first day of his transfer to F15K, he meets Cheol-hui, the units own top gun. Tae-hun is free-spirited, whereas Cheol-hui plays by the rules, and the two come into conflict almost immediately. However, Tae-hun quickly befriends his other colleagues: Dae-seo, Yu-jin, and Seok-hyeon. He also falls in love with Se-yeong, who is in charge of maintenance. Tae-hun continues his free-spirited ways and his antics get the entire unit suspended from duty. The world outside the base makes its presence known when a North Korean MIG fighter is discovered heading toward the South. Tae-hun and the rest of the squad are put back on active duty, and a reconnaissance mission turns into an all out fight, ending in Dae-seos untimely death and Seok-hyeons disappearance. Eventually Cheol-hui and Tae-hun come to an emotional understanding and the F15K makes preparations to stop a war and rescue their missing comrade.
This is the remake of director Shin Sang-oks The Red Muffler (1964). This movie is the soldiers friendship and lives through one guy, who becomes true soldier after joining the Air Force.
Formerly known as "Black Eagle", "Soar into the Sky", "The Red Muffler", (레드 머플러, Re-deu Meo-peul-leo) and ""Flight: Close to the Sun" (비상[飛上]: 태양가까이, Bi-sang: Tae-yang-ga-kka-i)

R2B: Return to Base | HanCinema Reviews

R2B: Return to Base | Shopping

R2B: Return to Base | Pictures

R2B: Return to Base | Videos | Suggest a video

R2B: Return to Base | Links | Suggest a link

R2B: Return to Base | Reviews

R2B: Return to Base | Facts

R2B: Return to Base | Community

R2B: Return to Base (알투비:리턴투베이스)