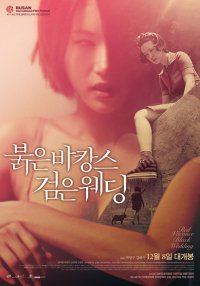 Synopsis
2007 APM (aka. PPP) Project
Once having worked as director and assistant director, the two directors now come together in this relay movie about an immoral liaison. The title is not the only provocative part about this movie. So is the actual narrative and level of expressions. It is comparable in many ways with [From Seoul to Varanasi], from its perspective on immorality to the way it captures the naked body, but it is completely different in style and flavor. Unlike [From Seoul to Varanasi], which is suggestive yet frankly honest, this movie is more of a comic melodrama, with an erotic touch here and there.
The well thought out vacation plans of an immoral couple is ruined when the husbands wife joins in. It is truly a damned vacation([Red Vacance], Kim Tae-sik). As a professor, he officiated the wedding of his lover and student. That night, she does not go to her honeymoon, but visits him([Black Wedding], Park Chul-soo). The movie is structured in an experimental manner, mixing fiction and documentary, but the simple and frank straightforwardness in the performances is unexpectedly refreshing. The impassioned performance of the forever supporting actor Jo Sun-mook, who this time plays the role of the man in both episodes, is worthy of a rediscovery. (JEON Chanil)