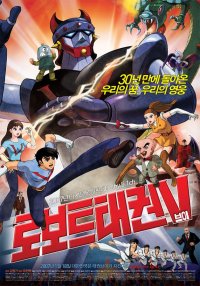 "Robot Taekwon V" was originally released on 1976/07/24.
Dr. Caf, Dr. KIMs co-developer of Robot TaeKwon V, used to be a laughingstock due to his ugly features, despite of his incisive mind. Dr. Caf kidnaps scientists and vicious athletes to take part of his plan. Dr. Caf disguises Mary (an android) as his daughter
and sends her to Dr. KIMs lab to steal the blue-prints of Robot Taekwon V. During Marys mission, Dr. KIM is murdered by one of Dr. Cafs robots allowing Mary to escape. Assuming Mary was the killer of Dr. KIM, Hoon resolves to get even with her.
In the meantime, Dr. Caf succeeds to establish Red Empire and changes his identity to Malcolm and declares war against the world. When each of Dr. Cafs attempts to destroy the world are thwarted by Robot TaeKwon V, he kidnap Dr. YOON, the father of
Young-hee. And Mary loses her life trying to help Dr. YOON escape.