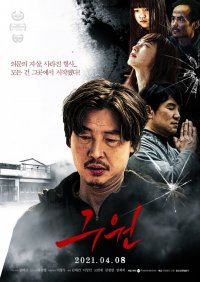 Synopsis
Detective Seok-jae heads to a cold riverbed in Miryang, Gyeongsangnam Province to confirm the rumored death of Jin-sook, a prostitute who stole one billion won from a brothel pimp, Dal-soo.

Detective Lim from Miryang Police Station, who seem to not be cooperative in the investigation asserts that the woman committed suicide, but Chun-ja, a coffee shop waitress who found the body says she would never have committed suicide.

During the investigation he learns about a prayer house, Seongrimwon, and gets into a traffic accident while visiting the place.

Seok-jae wakes up at Seongrimwon, and begins to dig into the secrets of the place.

And then on February 19, the shocking fact is revealed that the people in that place prepare to kill themselves in the hope of salvation.

View all 34 pictures for "Salvation"