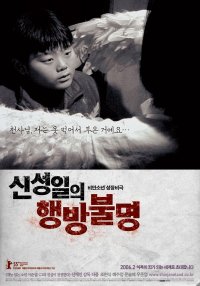 Also known as "Shin Sung Il is Missing"
Synopsis
An isolated orphanage, called the "House of Angels". The director of this orphanage religiously brainwashes the children into believing that eating is a shameful thing. Among the children, SHIN Sung-il is the most exemplary student who tries hardest to follow the director's doctrine, but he is also the most chubby. He tries to fast from time to time, only to fail. Meanwhile, the children suspect the director's real intention and plan an uprising to escape from the orphanage. However, it is Sung-il who escapes. Out in society, Sung-il discovers people eating openly without shame. With hatred toward such depraved people, he feels the pangs of hunger more and more...

View all 12 pictures for "Shin Sung-il is Lost"