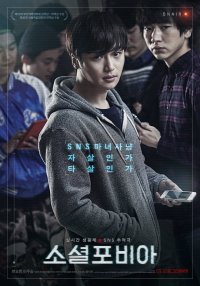 Synopsis
People tend to be intentionally provocative or extremely argumentative over petty matters on twitter. A woman who challenges men becomes targeted as public enemy. Young men expose her identity and even show up on her doorstep. But what they find is Min Ha-yeong, the woman who had hanged herself. What caused her death? Was it by suicide or murder? "Socialphobia" addresses the question of adopting a different identity on the Internet through the death of a woman. Two young men Jiwoong and Yongmin who were preparing for the police academy exam become involved in the case. What apparently looks like suicide is held under suspicion by the two as foul play. After posing the possibility of homicide, the young men return to the crime scene. However mystery itself does not seem to be the point of this film as it gradually exposes during the course of finding the truth to Min Ha-yeongs death, her life as it really was and what the two men in pursuit of the real cause of her death wanted to prove. Social network may connect people, but it also can become the host of a psychological sickness that people suffer from. (NAM Dong-chul)

View all 78 pictures for "Socialphobia"