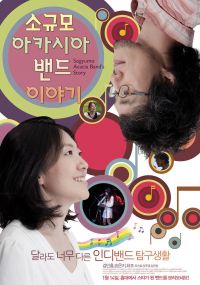 Synopsis
Generally performing around Hong-Ik University as a major independent group, the Sogyumo Acacia Band is a duo band composed of Min-hong and Eun-ji. Their sentimental melodies and lyrics have been very popular, keeping the band continuing on so far. The band has begun project groups by inviting freelance members for various music activities. These members include Yo-jo, who gained mass popularity and debuted through the Sogyumo Acacia Band. Gaining more members, Min-hong and Eun-ji go through conflicts, especially regarding Yo-jo presence and her role in their team. They doubt whether their current music is what they had originally pursued. This documentary film captures the way they live, feeling happiness through music, their concerns in reality, and the struggles they have in pursuing what they really want. The film speaks about their music and their lives, not in the easy flows, but in the tight tensions. Through the avoidance of eye contact, facial expressions, and different perspectives unfolded, the conflicts reveals itself. Min-hong and Eun-ji overcome the crisis by conversing with each other to restore their trust. The film reassures their passion in music through a free style musical journey