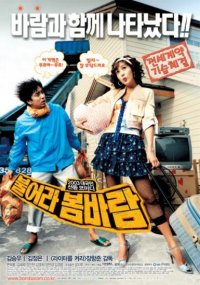 The cheapest and the stingiest!
A man, who has never spent a dime on a date...
A man, who prefers to double up on layers of thermals in the winter, instead of turning on the heater...
A man, who insists on using his beeper in this 21st Century, a.k.a. The Age of Mobile Phones, to save his phone bill...
He is the cheapest man alive! He's the infamous stingy writer, Seon-guk!
As he wrestles with his unfinished (and very delayed) manuscript, an unexpected woman moves into his house.
"I'm a respected man! I cannot live with a vulgar woman like her!"

The super peppy coffee shop hostess!
A woman, who befriends young high school boys to grey-haired grandpas with her sweet but off-beat charms...
A woman, who has traveled wherever the wind takes her on her scooter, while delivering coffee...
A woman, who is recruited to be the new PR manager at 'Forget-Me-Not' coffee shop...
She's the free spirit, bubbly coffee shop hostess! She's Hwa-jung!
For her new job, she moves to the outskirts of Seoul and finds herself a nice 2nd floor room in a house with a good looking fellow as her landlord.
"Hi. I'm Hwa-jung! It's super nice to meet you!!"

Mr. Stingy-man, what is he going to do?
Seon-guk is kicked out from his own bedroom on the 2nd floor of his own house. And, Hwa-jung moves in.
With everything else already going wrong in his life, when Hwa-jung abruptly enters his life uninvited, he completely loses the control of everything and everyone around him.
All the rules he had set up, all principles he had followed as Mr. Stingy-man, are completely shattered.
Now, with this unwanted intruder, his house becomes a never-ending party house with unauthorized usage of the heater! Plus, even his naive apprentice falls for her charms.
How will Seon-guk salvage all these sudden damages?