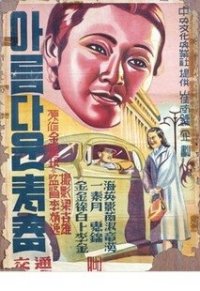 Synopsis
Film producer Lee Yeong-il is introduced to Jeong-hee, his friend's little sister. Unable to find an appropriate slot for her in his movie, he gets her a job in a record company and watches out for her. In time, their love grows deeper. Meanwhile, director Heo Hoon, who is making the film 'The Story of Chun-hyang' with Yeong-il, fires the lead actress of the film, Anna, when she causes too much trouble. Instead, Jeong-hee is hired in her place. Just as Jeong-hee proves herself worthy of the casting and the film-making progresses smoothly, Yeong-il and Heo Hoon face financial difficulties. Yeong-il turns to embezzlement in desperation and is thrown in jail.

View all 7 pictures for "Spring of Korean Peninsula"