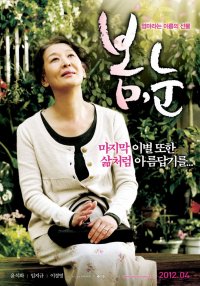 Synopsis
Spring, Snow is a heartbreaking tale depicting the last spring days of Sun-oks life, who must say goodbye to her family as she dies from a disease that we all fear at some point in our lives, cancer. Sun-ok, played by Yoon Seok-hwa, has dedicated her entire life to her husband and children, but they pay little attention to her and ignore her deep commitment to them up until they receive the news that she has cancer and has only a short time left to live. Though the film deals with oft-used themes like human mortality and family love, it still manages to project a deep sincerity with the bitter reality that love is hardly realized until its not there anymore, something we dont know until its too late.

Director Kim Tae-gyoon-I draws inspiration for Spring, Snow from his sisters 10-year battle with cancer. He said he wants his work to carry the paradoxical message that people can experience lifes most memorable moments even during times of great suffering.

The film is also a comeback for actress Yoon Seok-hwa, after being away from the big screen for 25 years. Yoon previously appeared in the films Nunsense, The Last Empress and Agnes of God.

View all 56 pictures for "Spring, Snow"