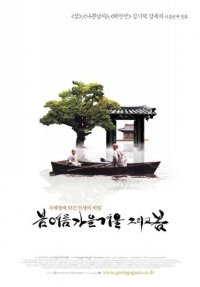 Spring - Child Monk takes life of animals out of innocence
A child monk ties a stone to a back of fish. Same plight awaits a frog and a snake. The child monk roams the brook in search of the fish and the frog as his punishment allotted by the old monk.

Summer - Boy Monk in love learns obsession
The monk is now 17 years old. To the lonely hermitage, a girl comes to convalesce. Before long, warm feelings towards the girl sprouts in the boy's heart. Their ripple in the water turns into an act of love.

Fall - Young Monk in agony of malice
The boy returns to the hermitage in the mountains as a young man in his thirties after committing a murder. The old monk whips him finding the young man attempting suicide in front of the statue of Buddha. Old monk order him to etch the Pranja-parpamitasutra, meanwhile he finds peace in his heart.

Winter - Mature Monk in days of enlightenment
The monk, now in his full maturity retraces his steps to the abandoned hermitage in the mountains. A woman wearing a veil visits the hermitage with a baby. She leaves her baby behind and runs away.

View all 16 pictures for "Spring, Summer, Fall, Winter... And Spring"