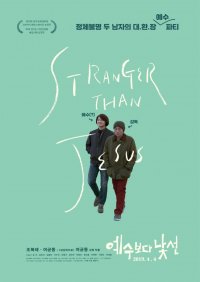 Synopsis
Its a black comedy movie whose story is a days journey of a movie director who got an offer to make a movie with a best-selling book called Dinner with Jesus. The director doesnt think it makes sense that Jesus comes to have dinner with someone. He is also embarrassed to meet an actor who calls himself "Jesus". He, who is almost bankrupted due to the failure of his previous film, is not interested in this movie and has no idea whom Jesus will meet for dinner and what they will talk about at the dinner. The director and the actor who calls himself "Jesus talk about prejudice against Jesus while meeting a retired gangster, a valet parking man, a Chinese food delivery man, a producer, an investor, a hot actor, and a would-be actress. He gradually realizes his passion to movies while doing this. However the investor gives up on making the film when he opens his mind for this film. The movie seems to be called off before it is started...

View all 23 pictures for "Stranger than Jesus"