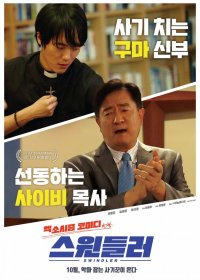 Synopsis
A swindler who's after another shot at life, becomes a demon-chasing 'exorcist priest'?

Afterwards, Reverend Jang of the pseudo-church proposed a partnership to Do-jin, who is on a roll with fraud, and swept the money and hearts of the believers.

But for a moment, the joy disappeared and Yoo-hee who was fooled by Do-jin, appears in front of them, and a crisis comes...

A bizarre scam of a fake priest who will shake even the devil's head begins!

View all 18 pictures for "Swindler"