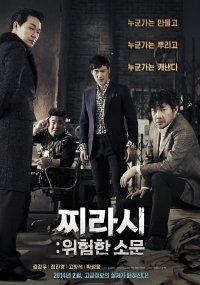 Formerly known as "Advertisement: Dangerous Rumors" on HanCinema
Synopsis
A scandalous rumor about up-and-coming actress MI Jin is included as a gossip item in a stock market tipsheet and propagated by the tabloids, causing her to take her own life. WOO Gon (KIM Kang-woo), the actresss long-time devoted manager who dedicated everything to building her career, initiates a vengeful investigation to expose the sources of the malicious rumor. With unexpected assistance from a tabloid distributor Mr. Park (JEONG Jin-yeong) and a legendary wiretapper BAEK Moon (KO Chang-seok), Woo unravels the opaque and lucrative world of secret tips and salacious rumors.

First Film to Place a Spotlight on Korean Tabloid Culture
In todays ever more connected society, everyone has an almost instantaneous platform to share information with the world, which then can spread like wildfire through social media, blogs, online media and even reach the front pages of the most respected news institutions. Unfortunately, rumors repeated often enough become mistaken as fact and, coupled with one of the worlds highest rates of suicide, a lethal weapon. Recent years have seen a shocking number of high profile Korean actresses found dead of suicide after suffering from depression after being maligned and bullied online. "Tabloid Truth" is the first movie to address the sensationalistic and poisonous tabloid culture of South Korea, where rumor-mongering drives lucrative traffic while also wreaking unaccountable havoc on its victims lives.

"Tabloid Truth" portrays a particularly insidious and unexpected forum for tabloid gossip-mongering: the stock market tipsheet. In weekly secret meetings consisting of corporate personnel, politicians, reporters, public officials, and others, insiders exchange information about the latest goings-on. The collected intelligence is published into a tip sheet and distributed through paid subscriber channels before getting picked up by the tabloids as juicy blind items. What makes this combination particularly toxic is the sheen of respectability and truth given by the financial market players involved. What would they gain by lying? It must be true...

"Tabloid Truth" keeps the audience waiting for the next big revelation as Woo-gon (played by KIM Kang-woo) digs deep into the world of scandal-mongering and discovers the enigmatic individuals responsible for sourcing, trading, and distributing these nuggets, factual or imagined.

Deeply devoted and driven talent manager - Woo-gon (Kim Kang-woo)
Giving up has never been an option for WOO Gon. Ever since he first discovered actress MI Jins potential as a star, Woo worked tirelessly to escalate her acting career. Just as she was getting her big break, Mi became a target of a nasty rumor which caused her to take her own life. This infuriates Woo and drives him to seek out the people responsible for starting the rumor so that they can pay for their wrongdoing.

Former investigative journalist and now tabloid distributor - Mr. Park (Jeong Jin-yeong)
Mr. Park used to be a renowned investigative journalist exposing stories of corporate corruption. After a mysterious accident that led to a major leg injury, Mr. Park changed his career path to become a tabloid distributor. He has a great sense of humor and lives a carefree lifestyle. That is until Woo seeks his help and he is forced to get back into his investigative mode, carefully following the trail of secrets and rumors.

Infamous illegal wiretapper - BAEK Moon (Ko Chang-seok)
BAEK Moons life philosophy is to carefully observe everything and everyone. He even believes that there is nothing wrong with spying on his lovers. He normally avoids high-risk projects but he unintentionally gets pulled into Woo Gon and Mr. Parks private investigation.

View all 109 pictures for "Tabloid Truth"