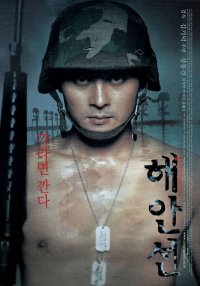 One night at the military patrol zone, a drunken couple, Mee-young and Young-kil, are making love and Private KANG spots them. He becomes riddled with fear and shoots his automatic rifle in no time, and the man gets shredded into pieces by bullets and grenades. Heedless of Private KANG's trauma, he's got award of a period of leave for catching a spy. After returning to the unit, KANG's behavior becomes more and more violent, and later becomes discharged by a mental disorder. But KANG can't stay away from the unit. Meanwhile, having witnessed the gruesome death of her lover, Mee-young goes mad and mistakes any man around the base for her lover. The soldiers take advantage of her one by one, and her trauma worsens. The beautiful coastline becomes a living nightmare for everyone as Private KANG and Mee-young wreck havoc around the shores.

View all 29 pictures for "The Coast Guard"