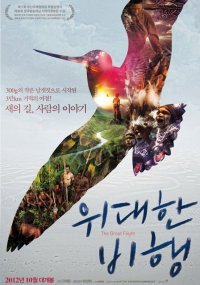 Synopsis
In 2008, a godwit with different color rings was seen at the estuary of Nakdong River in Busan. The tracking of his flight showed it was from New Zealand. He was named YRBY based on the colorful rings he wore. He has been flying from New Zealand to Alaska via the Korean peninsula for four years. Considering he flies 30,000Km per year, YRBY, a bartailed godwit, travels as much as he can reach the moon in his lifetime. Following the godwits journey around the earth, the film tried to prove that humanity and nature are interconnected around the axis of ecosystem, the Earth. The eco documentary shows different ethnic groups with different civilizations, but a godwit proves that all the people and civilizations on the Earth are inseparably connected with each other. With an omnibus of a small godwit that is 300g light but flies the longest distance of 30,000Km and a 70-year-old old man who hunts birds-of-paradise in primitive forests, the film says that the flight and the hunting are the meaning and objective of a life. (MOON Woong)

View all 23 pictures for "The Great Flight"